According to C , H P Blavatsky

against in the Franco-Prussian War of 1870 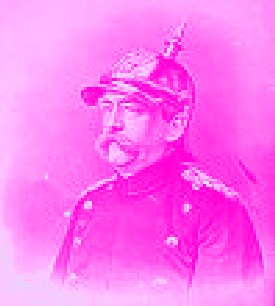 This extract comes from C ’s  “An Occult View of the War” which was written during and about World War One. It contains some strong anti-German sentiment. After a tirade against the Germans, he is speaks of Otto Von Bismarck 1815 - 98, the German Chancellor from 1862 – 90, denouncing him as an apostle of evil and outlining a claim made by H P Blavatsky that he was an occultist and used occult practice to assist a Prussian Victory against France in the Franco – Prussian War of 1870.

“Because of their intense pride, because of the teaching of brutality and of force, (of blood and iron instead of the law of love and because of the low level of general morality which is the direct consequence of such teaching, they have laid themselves open to this dreadful obsession, and some of the great Lords of the Dark Face have again taken their place among them.

Prince Bismarck was such a one, While he was still alive he laid his-plans for the subjugation of . You may be thankful he has not survived till the present, for plans were far wiser than those of the men who have followed him. Long ago Madame Blavatsky explained to us that he had considerable occult knowledge, and that before-the war with France in 1870 he had traveled physically to certain points to the north, the south, the east and the west of France, and had there east spells of some sort, or made magnetic centers, with the object of preventing effective resistance to the German armies. Undoubtedly the French collapse at the time was so complete and unexpected that it seemed to need some unusual explanation.”

This war between and began as the result of a diplomatic incident between King William of and a French government minister generated and hyped up by during a dispute over a German candidate for the Spanish throne. Troops from other parts of the then existing German Confederation were involved but provided most of the troops and Prussian Generals were in overall command.

The French armies were defeated within a couple of months but held out for five months. French Emperor Napoleon III was deposed and replaced by the 3rd Republic. During the siege of , the Germans proclaimed the new German Empire (Second Reich) at the . As part of the peace settlement lost the and provinces.

An Occult View of the War By C W Leadbeater

for a lighter view