As a Man Thinks, so he Becomes 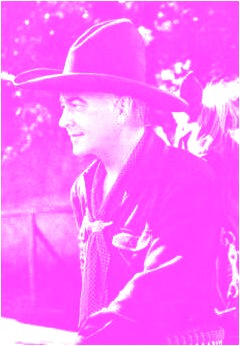 This is an anonymous article taken from the internet about actor William Boyd who became inseparable from the Hopalong Cassidy character that he played. I put in the title above as I think that William Boyd’s life is an outstanding, although rather extreme, example of The Theosophical maxim “As a man thinks, so he becomes” being put into action.

Anonymous article taken from the internet

When I was a little boy I used to ride the range astride the arm of my father's big chair while I watched my hero, Hopalong Cassidy, on our black and white TV set. Hoppy was my hero for all

the reasons young boys have heroes.

He was strong and handsome. He fought for justice. He rode a big horse really fast and he wore cool outfits. Even today Hopalong Cassidy is still on my heroes list.

My mom liked Hoppy for different reasons than I did. She liked him because he was always polite. He always drew second. And nobody got killed on his show. Neither of us knew that both the Hopalong

Cassidy character on our TV screen and William Boyd, the actor who played him, had started out as something very different from what we saw.

The character, Hop-A-Long, was created by a writer named Clarence Mulford who came from , of all places. His Hopalong Cassidy wasn't someone my mother would have liked. The original Hopalong had a permanent limp from a gunfight. He had red hair. He drank and chewed tobacco, and cussed. He was quite a hell raiser.

So was William Boyd, the actor who would eventually be the Hopalong Cassidy I knew. He was born in Ohio and grew up in Oklahoma where he had all kinds of jobs before heading out to Hollywood.

He had been a successful actor in both silent movies and talkies. Cecil B.DeMille cast him in several movies. But he was also a drinker and a woman chaser. Biographers differ on how many times he was married before 1935. It was either three or four, none of which lasted very long.

In the early thirties Boyd's career was stalling. His once blonde hair had gone prematurely gray. Parts were harder to come by. That's when an independent producer named Pop approached Boyd about playing a character based on Clarence Mulford's Hopalong Cassidy.

Boyd wanted to play the character, but he wanted the character to be more like what he thought audiences would like. He pushed for a straight-arrow good guy who fought for justice. agreed and the first Hopalong Cassidy movie came out in 1935.

At first the character was called Hop-a-long Cassidy, and Boyd – like the original Hopalong Cassidy character – walked with a limp. In later movies, the dashes and the limp both disappeared.

Audiences loved Hopalong. So did Boyd. It seemed like he was becoming more and more like his character every day. Soon Boyd didn't curse, just like Hopalong. He quit chasing women, too.

1937 was the year Boyd married Grace Bradley. They remained together until he died. With his personal life in order and support at home Boyd began to concentrate on promoting his character and on the business of being Hopalong Cassidy.

He started by hocking or selling just about everything he could to buy the movie rights to the character. In 1942 he set up a production company and started turning out the Hopalong Cassidy

Things went really well until the end of the forties. Then series westerns, like Hopalong Cassidy, were on the decline in the movie theaters. People were tired of them. Boyd owned the films, but he didn’t have any place to sell them.

Then, sometime around 1948, a technician he was working with told Boyd about television and how you could show movies on it. The entrepreneur and businessman in William Boyd saw the possibilities

immediately. He also saw that he’d need to get complete rights to the Hopalong Cassidy character in order to make his plan work.

In order to do that Boyd had to go and talk to Clarence Mulford, who wasn’t all that pleased with the way Boyd had changed his character. Mulford was pleased, however, with the possibility of

making some more money from the character and so the men came to a deal.

One more time William Boyd pawned, mortgaged and sold everything he had to seize an opportunity. Things got so bad that at one point when he was invited to appear on the Milton Berle show he

didn't have the money for a plane ticket.

In 1949, Boyd cut several of the movies into fifty-four minute lengths and started showing them on KTLA in . Soon the National Broadcasting Company picked up the shows.

In 1952, the show became a half-hour show. Twelve more movies were cut down from their original length to fit this, and forty new movies were produced.

Boyd aggressively promoted the character and the show. He appeared at rodeos and state fairs and just about any event that people would have him. And he was always gracious to the kids he met.

He loved milk. He’d stop at a dairy and convince them that it was a good idea to have him as an endorser. Some pictures would get taken, and that dairy’s milk would soon bear the label, “Hoppy’s

favorite.” It all helped promote the show, but Boyd saw opportunity beyond the show itself.

William Boyd understood his audience and understood that people really identified with their heroes. They wanted something of their hero around them when the TV show was over. Hopalong Cassidy products could do that.

So Boyd became one of the very first to license his character and likeness to manufacturers who eventually made over 2500 different Hopalong Cassidy products and a mighty stream of wealth for Boyd.

thermoses. There was a Hoppyland Theme Park. And there was the ultimate collector’s item, The Hopalong Cassidy roll-fast bicycle.

Like with the dairies, Boyd worked tie-ins with lots of other businesses as well. One favorite was the Hopalong Cassidy Savings Club. Hoppy would show up at the local bank to promote the club

and meet the kids. The kids would get a certificate, a picture of Hoppy, a real savings passbook for the account they opened with five dollars, and a bank shaped like Hoppy’s distinctive hat with

a coin slot in the top where you could drop your pennies.

By the time Boyd died in 1972 the hard-drinking Hopalong Cassidy character had become known as the “Milk-drinking, polite champion of the West.” The hell-raising William L. Boyd had adopted the

same persona, and both – in some strange alchemy – would be loved by children who had seen them and who shaped some of their values around the values they espoused.

Other facts about William Boyd

Cecil B DeMille offered him the part of Moses ahead of Charlton Heston in the 1956 Film, The Ten Commandments. He turned it down because he thought his Hopalong Cassidy image would damage the film.

In the last ten years of his life, he had a cancer operation and suffered form Parkinson’s Disease. He forbade any photographs and declined any TV appearances as he believed it would upset younger fans to see their hero in such poor shape.

This generally accepted, and often quoted, maxim of the Theosophical Society is found in Annie Besant’s Life and Life after Death, published 1919

The full quotation is

“Now your character is built by your thoughts; as you think, so shall you become. It is written in the Chhãndogyopanishad: "Man is created by thoughts. As a man thinks, so he becomes".

Several other variations appear in Theosophical writings including

“what a man thinks, that he is”

From H P Blavatsky’s Gems from the East

“that which he thinks upon, that he becomes”

From Annie Besant’s Bearing of Religious Ideals on Social Construction

Variations of the maxim occur in both Buddhist and Hindu scripture