Promotes good with his bad example 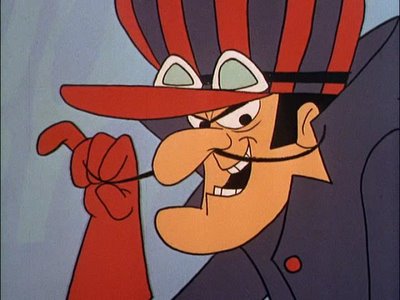 Dick Dastardly is an incredible example of an all round bad guy who influences people for good through his obnoxious personality and his compulsion to cheat even though he doesn’t have to.

In the Wacky Races, you can’t help noticing that he has a rocket powered car when everyone else has ordinary engined ones. So he should be able to win every week without cheating.

Cheating however is so much part of his personality that he uses his rocket powered car to go miles out in front and then tries to sabotage the race in his favour. Of course this always goes disastrously wrong except for the time he reaches the finish line in a photo finish only to jump out of the car a yard short of the line and pose for the photograph.

The theme of the Wacky Races is that every week the bad guy always loses rather than the good guy always wins. Cheats never prosper and Dick Dastardly is an excellent advert for playing the game. Nobody else in the race cheats and nobody else invites anything like the misfortune that he does. The others don’t even gang up on Dastardly, he is his own worst enemy and that is sufficient.

Dick Dastardly’s side kick, the dog Muttley, completes the equation. Dastardly abuses Muttley and often blames him for his own failings and the disasters he brings on himself. Muttley is much smarter than Dastardly, has absolute contempt for his master and sniggers at his misfortunes. He has a legendary often imitated routine for cursing him under his breath. In one memorable scene Dick Dastardly, faced with calamity calls on Muttley to “Do something, anything” and Muttley responds to this by dancing a jig.

Dick Dastardly’s car is the Mean Machine and with eleven cars in the race he is numbered the double zero (the numbering has a zero in front of it up to number 10 e.g. Peter Perfect is number 09). Zero is the number of the Fool in the Tarot and this is the only card which has survived into the modern deck of playing cards as the Joker. This card is known as the Wild Card as it can often take the place of any card in the pack and like the fool is unnumbered, so can mean all or nothing. However unlike the Fool of the Tarot, Dastardly is not setting out on a profitable journey of experience and learning. He is a literal fool who never learns from experience and his life stays at zero.

Dick Dastardly and Muttley (with other weird characters Zilly and Klunk) also appear in another cartoon series remembered as Stop the Pigeon. In this series the evil and humourlessly obsessive Dick Dastardly is leader of the Vulture Squadron of First World War air aces whose assignment is to stop a carrier pigeon getting through with its messages. They always fail disastrously.

Dick Dastardly doesn’t learn from experience and never gives up. This characteristic is shown in both series a gives a clear message that evil never goes away.

You haven’t heard of Dick Dastardly ?

Here is some more info.

Dick Dastardly is a character who first appeared in the Wacky Races and has the distinctive catchphrase “Drat and Double Drat” when things go wrong.

The Wacky Races is a cartoon series about a group of 11 different cars racing against each other in various road rallies, with each driver hoping to win the title of the "World's Wackiest Racer." The cartoon was unusual in the large number of regular characters, twenty-four in total: the twenty-three people spread among the 11 race cars, plus the unseen (and never identified) race announcer. Another unusual feature of the series is that the stars of the show are the villains as opposed to the heroes.

The series was produced by Hanna Barbera in 1968 and was first shown in the in 1969. Dick Dastardly and Muttley were loosely based on Jack Lemmon's portrayal of Professor Fate his sidekick, Max Meen (Peter Falk) in the 1965 film, The Great Race. You may recognize other characters from this film. 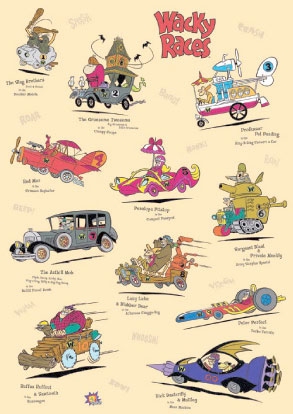 Here are the Drivers and cars, you can now memorize these and impress people at parties.

1 Dick Dastardly and Muttley in the Mean Machine 00

2 The Slag Brothers in the Bouldermobile 01

3 The Gruesome Twosome in the Creepy Coupe 02

4 Professor Pat Pending in the Convert-a-Car 03

5 Red Max in the Crimson Haybailer 04

6 Penelope Pitstop in the Compact Pussycat 05

8 The Ant Hill Mob in the Bulletproof Bomb 07

9 Luke and Blubber Bear in the Chuggabug 08

10 Peter Perfect in the Turbo Terrific 09

11 Rufus Ruffcut and Sawtooth in the Buzz Wagon 10 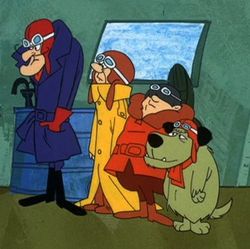 From Left to Right

Some info about “Stop the Pigeon”

The real title of the series was “Dastardly and Muttley in Their Flying Machines” but everyone knew it by the opening song sung by Dick Dastardly which repeats the phrase “Stop the Pigeon” about 20 times. It was produced by Hanna-Barbera from 1969 to

The show features Dick Dastardly and Muttley, the comic villains from Wacky

Races, as World War I flying aces and members of the Vulture Squadron, a crew of

delivering messages to the other side. The Vulture Squadron has two other members; Zilly, the coward and Klunk, the fanatic whose only aim in life is to stop the pigeon.

Dick Dastardly gets his orders over the phone from “The General” who is never seen except for his arm which occasionally appears from the telephone to seize Dastardly.

The General is always able to reach Dastardly by phone even when Dastardly is flying (or, more often than not, falling) with randomly appearing telephones, although it is never explained how. The telephones are almost always of the old-fashioned "candlestick" design, and often delivered to Dastardly by paradrop. They also

occasionally explosively self-destruct when the general hangs up.

Both the Wacky Races and Stop the Pigeon have been very popular in the UK and are still shown on UK television from time to time.